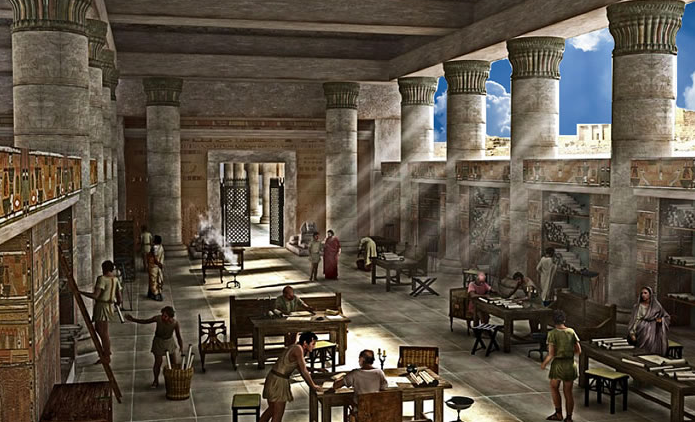 here is the story of Hypatia, a great scientist and philosopher who lived in ancient Alexandria. You can find this story on the book Goodnight stories for rebel girls, by Elena Favilli and Francesca Cavallo.

Once upon a time, in the Ancient Egyptian city of Alexandria, there was a huge library. The largest library in the whole world at that point, this was a library with no books, and no paper. People wrote on papyrus (which was made from a plant), which they rolled into scrolls instead of having flat books like we have today. In this ancient library, there were thousands of scrolls, each handwritten by a scribe and carefully kept on a shelf.

In the library at Alexandria, a father and a daughter sat side by side studying scrolls together. Philosophy, math, and science were their favorite subjects.

Their names were Theon and Hypatia.

Hypatia solved equations and put forward new theories about geometry and arithmetic. She liked studying so much that soon she started to write her own books (oops! scrolls!). She even built an instrument, called an astrolabe, for calculating the position of the Sun, the Moon , and the stars at any given time.

Hypatia taught astronomy and her classes were always popular; students and other scholars crowded in to here her to speak. She refused to wear traditional women’s clothes, and gave her lectures dressed in scholars’ robes like the other teachers. Sadly, all her works were destroyed when the library burned down. But luckily, her students wrote to each other about Hypatia and her brilliant ideas, so we could also learn about this genius of Alexandria.